Plant a tree in memory of M. N. Townsend
An environmentally-friendly option 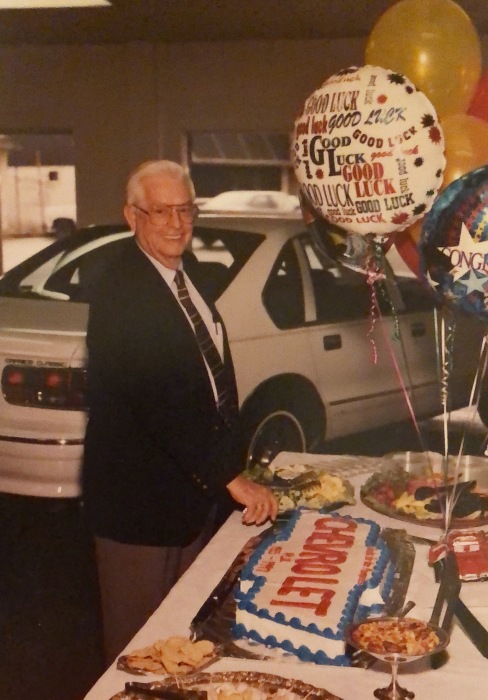 Maurice Neal Townsend, age 88, known to friends and family as simply M.N., passed peacefully on Tuesday morning, October 8, 2019. He is survived by his wife of 64 years, Johnnie Sue Eads Townsend. He always referred to her as Dude.

A native of Decatur County, M.N. graduated from Parsons High School in 1949. He enlisted in the US Navy in 1951, serving on the USS Fulton, a submarine tender, until his honorable discharge in 1955 with the rank of Yeoman Third Class. M.N. attended Union University and the University of Tennessee Knoxville. He married his sweetheart in February 1955. In June 1955, M.N. began working at Townsend Chevrolet, having a distinguished sales career. He was a partner/co-owner and dealer from 1970 to his retirement date in 1997, after 42 highly successful years. A true sales professional, M.N. loved serving customers in Decatur and surrounding counties. M.N. was a former member of the Parsons Lions Club.

M.N. enjoyed supporting the Riverside Panthers, the Tennessee Volunteers, and the Tennessee Titans. He loved the outdoors, his garden, and caring for his manicured yard with his John Deere tractor.

M.N.’s greatest love was the cherished tradition of spending weekends and holidays with Dude, his children, and grandchildren at the family cabin on the Tennessee River. Mr. Townsend’s seven grandchildren are blessed to have known him especially well, a man of unconditional love for his family, known as their beloved Pops.

He is also survived by his two children: Pam (Ronnie) Townsend Vise of Parsons and Neal (Cathy) Townsend of Franklin.

M.N. was a member of the First Baptist Church in Parsons.

Burial to follow at Mt. Ararat Cemetery in Darden.

In lieu of flowers, the family requests that memorials be made to the Parsons First Baptist Church Building Fund.

Parsons Mortuary in Parsons, Tennessee will be in charge of services.

A service summary is not available

Plant a tree in memory of M. N. Townsend
An environmentally-friendly option

Plant a tree in memory of M. N. Townsend

Be the first to share your favorite memory, photo or story of M. N.. This memorial page is dedicated for family, friends and future generations to celebrate the life of their loved one.

We ask on behalf of the family that you keep your comments uplifting and appropriate to help all who come here to find comfort and healing.

Plant a tree in memory of M. N. Townsend